Smart Measurement’s ALSONIC-AVM system is an open channel flow meter that works as an area-velocity meter in conjunction with a user-supplied level transmitter to measure flow rates in open channels. The ALSONIC-AVM consists of an advanced DSP-based flow computer and four transducers, with the transit time difference of ultrasonic sound pulses being used to measure the open channel flow velocity. The ultrasonic pulses are transmitted upstream and downstream across the channel at an angle between the flow direction and the sonic wave path; the difference in the sonic wave’s transit time is directly proportional to the liquid velocity.

The ALSONIC-AVM may be used in rectangular, circular, trapezoidal, or other shaped channels. Since the transducers create almost no restriction, virtually no head loss is created. The advanced DSP-based flow computer with cross-correlation and FFT technology allows this system to work in the most difficult applications, including those involving liquids with high concentrations of suspended solids and air or a large noise component.

Our unique transit-time technologies will enable accurate flow measurement even with less than ideal flow profiles. The ALSONIC-AVM also comes with an optional, patented Laser Pointer Alignment tool for alignment of each pair of transducers. 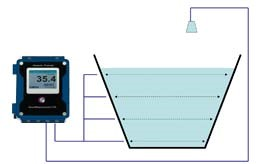